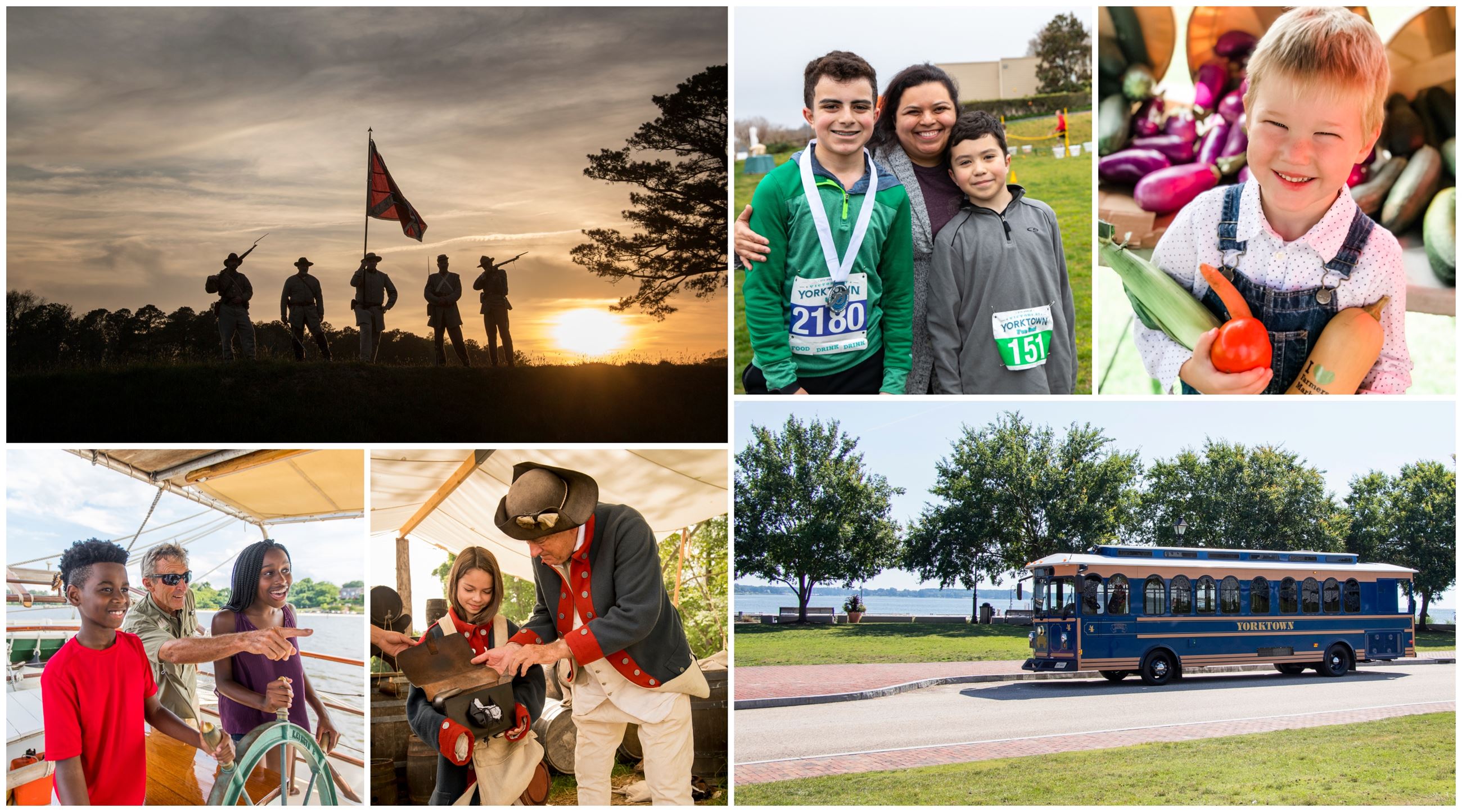 3/18/20 UPDATE: Since this blog was initially posted - Due to concerns over the COVID-19 virus, most Historic Yorktown restaurants, museums, and attractions have closed if they were already open, or have delayed opening for the summer tourism season. Several events have also been canceled.

Hopefully Punxsutawney Phil got it right and spring is indeed just around the corner. Warmer temperatures mean Yorktown will soon come alive with living history demonstrations, the return of our home-ported tall ship along the skyline, and the clanking of weekend cocktails on the open-air patio at Water Street Grille.

Whether you’re visiting from out of town or you live just around the corner, there’s something fun for every person in your family, and it’s a trip that won’t break the bank. From the re-opening of our outdoor attractions to special events to dining specials, history, and the free Trolley—scroll through the options below and we guarantee you’ll find fun, no matter your budget! 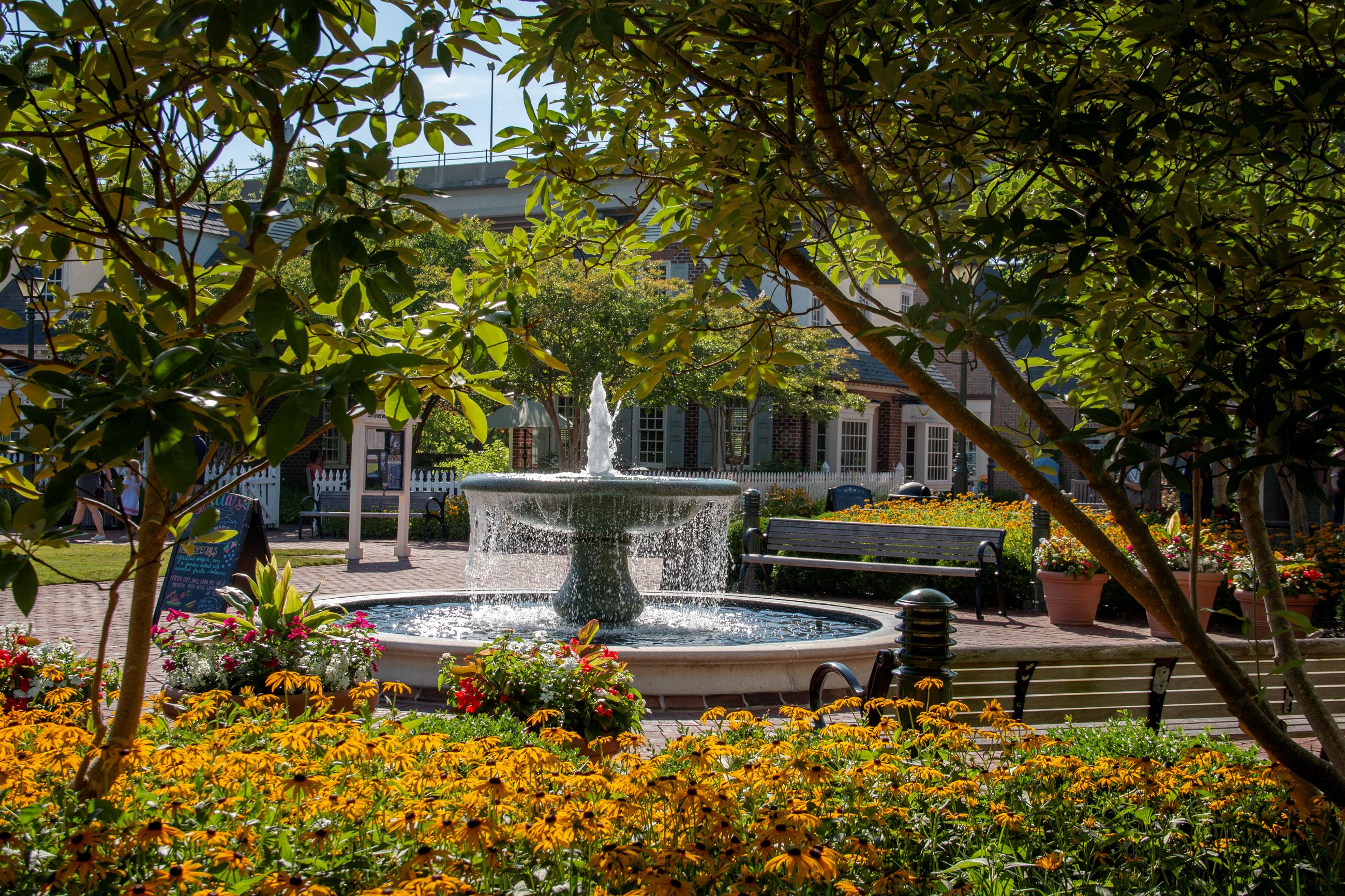 Captain Mayhem is looking for new recruits aboard the Schooner Alliance! Join his band of marauders during a Pirate Adventure Cruise on the York River. Children get to raise the sails, steer the angry seas, and even fire a cannon! Tickets are $27 for kids (12 and under) and $39 for adults. Cruises depart from Riverwalk Landing every morning at 11 a.m. for a 90-minute adventure. While the official sailing season doesn’t start until May 24, the ship’s crew gets in on the spring break fun too (Apr. 5 – 18). The Alliance also offers history sightseeing cruises and romantic sunset sails starting April 4 and those run until the end of November. 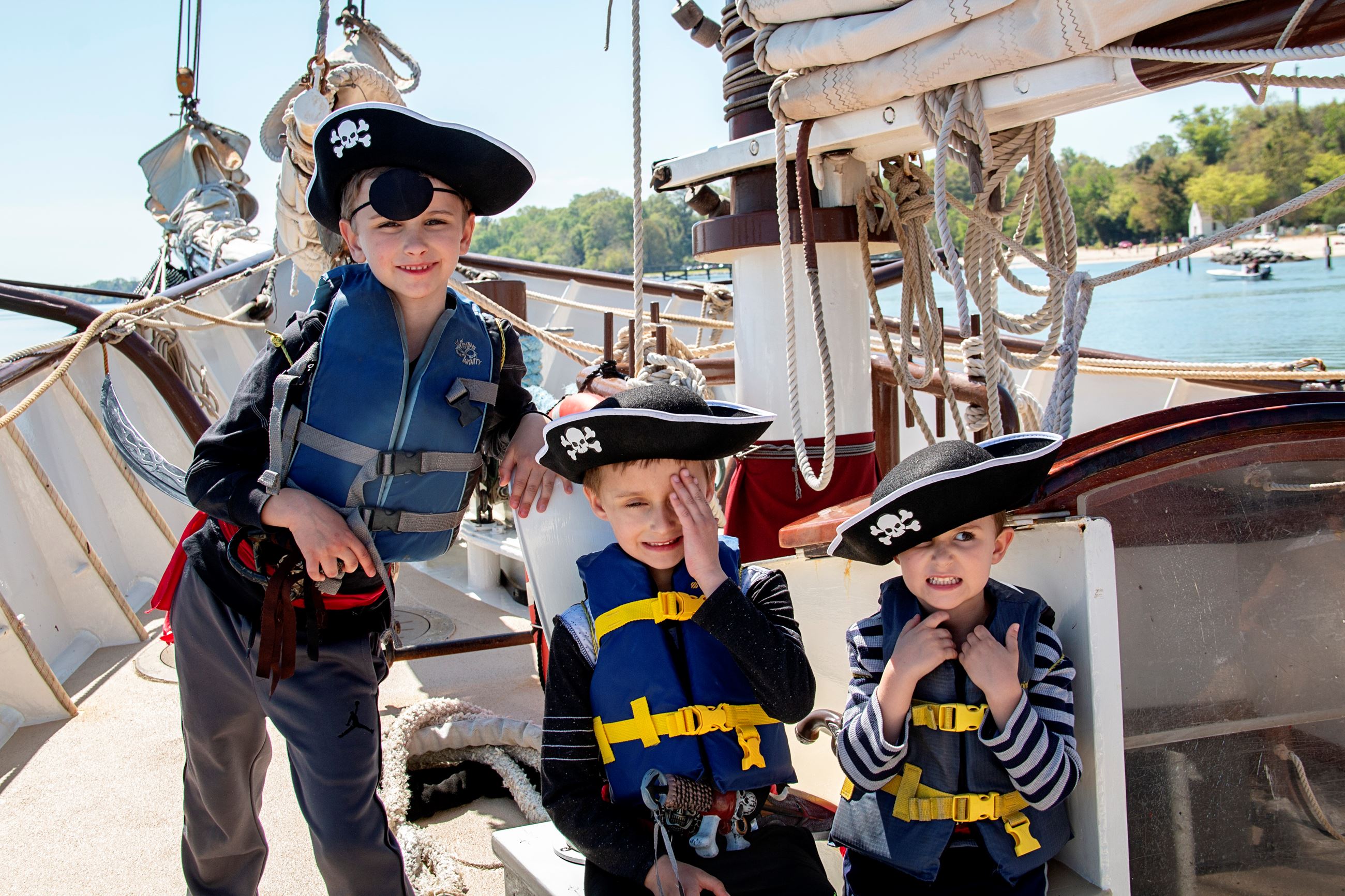 The fun in town isn’t just during the day! Be sure to come back after the sun goes down. Learn about the history and haunts of Colonial Yorktown as told by actual paranormal investigators when you book a Yorktown Ghost Walk. These tours start April 13 and run Monday through Thursday at 8:30 p.m. and Friday and Saturday nights at 7:30 and 9:30 p.m. (757.759.1320). Tickets are $10 per person, with a 20% discount for military and first responders.

While it isn’t quite warm enough in early April to rent paddle boards and kayaks—you can rent a bicycle to ride in and around Historic Yorktown, and to explore the trails on the Battlefield at your own pace.

If you have teenagers, you can also book a guided Segway tour. Your kids have to be at least 14 years of age. Parents, this is an awesome way to sneak in a little education during that break from school! 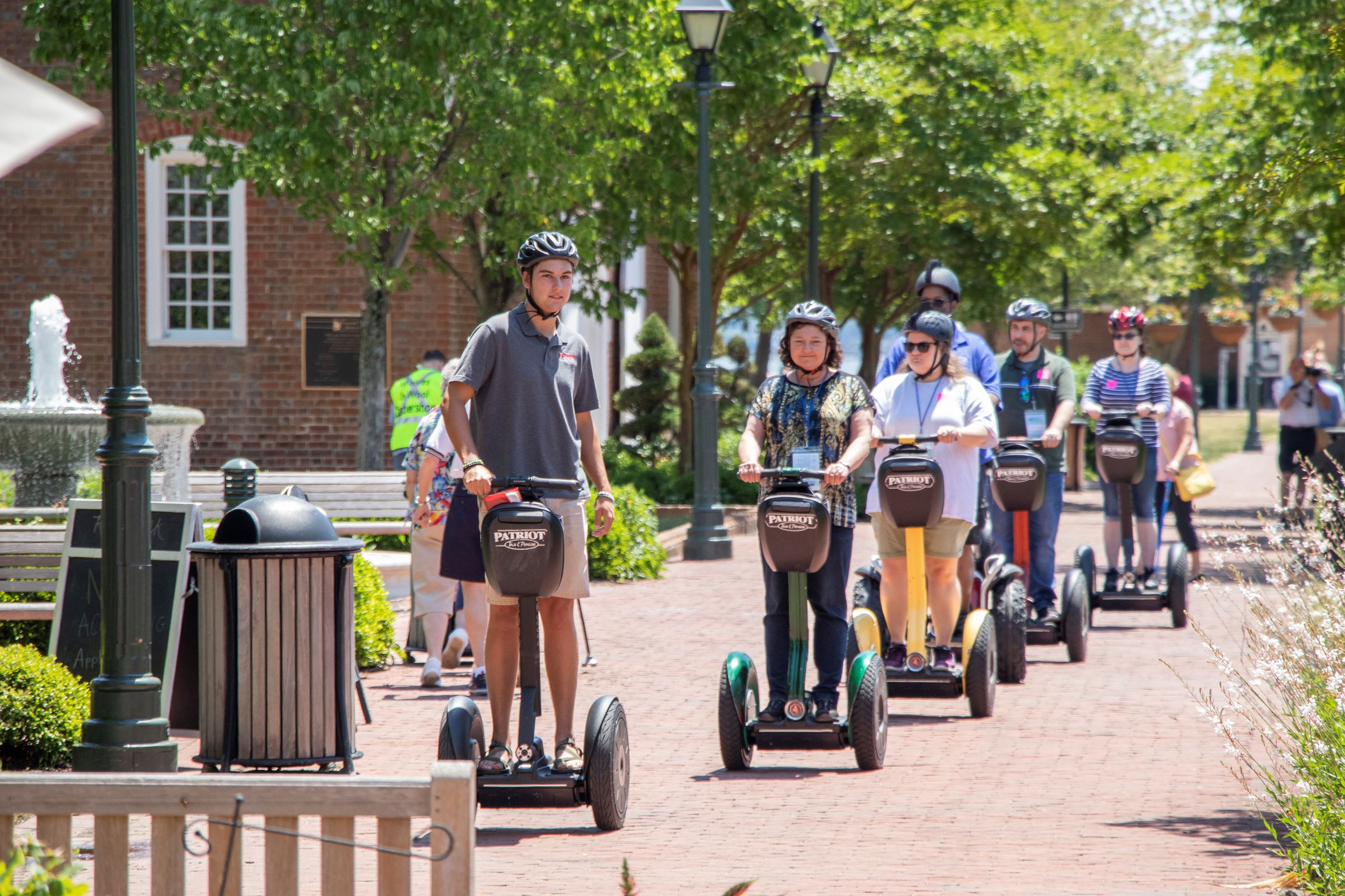 Afternoon 1-hr Breeze Tour ($39) at 2 and 3:30: Travel along the beautiful York River—from the bluff at the American Revolution Museum at Yorktown, to the entrance to the National Park Service Visitor Center. Along the way, your guide will share some fun tidbits about the history of the town.

Morning 2-hour Historical Tour ($65) at 11:30: During this longer tour, you’ll learn the basic history of Yorktown during the Colonial, Revolutionary, and Civil War periods. Your guide will take you along the waterfront area, the bluffs overlooking the river, and the historic village along Main Street.

It’s important to note that minors must be accompanied by a parent or guardian. Make your reservations for either tour, here.

The Victory Family YMCA invites you to register for its annual 5K, 10K, and 1-Mile Fun Run. These historical and scenic races begin at Riverwalk Landing along the waterfront. Run past landmarks such as the Yorktown Victory Monument, Cornwallis’ Cave, and Surrender Field. Post-race activities will include music, a costume contest, craft beer, wine, soft drinks, food, an awards ceremony, and door prizes. Kids ages 13 and under who participate in the Fun Run will receive a free scoop of ice cream from Ben & Jerry’s. All race registration proceeds go to the Victory YMCA. Your support helps them strengthen our community and keep families healthy. Register early and get a discount!

You don’t have to race to enjoy fun as a family at Healthy Kids Day from 8:30 to 11:30 a.m. Bring the kids for fun, active play and educational activities, some with a Revolutionary theme. 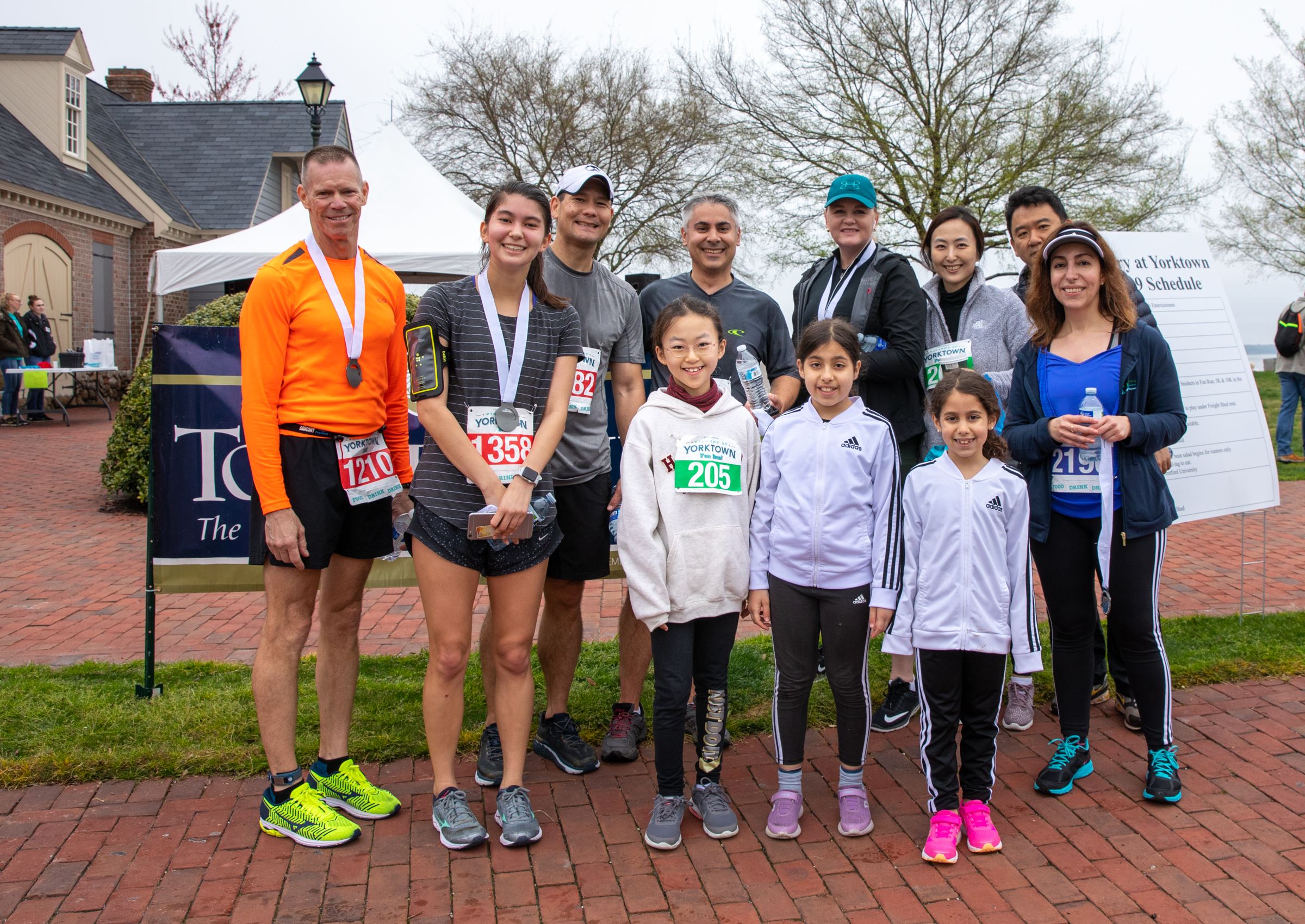 Roast and toast! Mobjack Bay Coffee Roasters at 411 Main Street will celebrate the kickoff to Spring Break with a Backyard Oyster Roast. In addition to the roasted oysters (and tasty toppings!), enjoy corn on the cob, petite sandwiches, and potato salad. Tickets are $35 a person ($15 for those 20 years and under), and it includes one glass bottle drink, coffee, tea, or water. Wine and beer will be available for purchase. 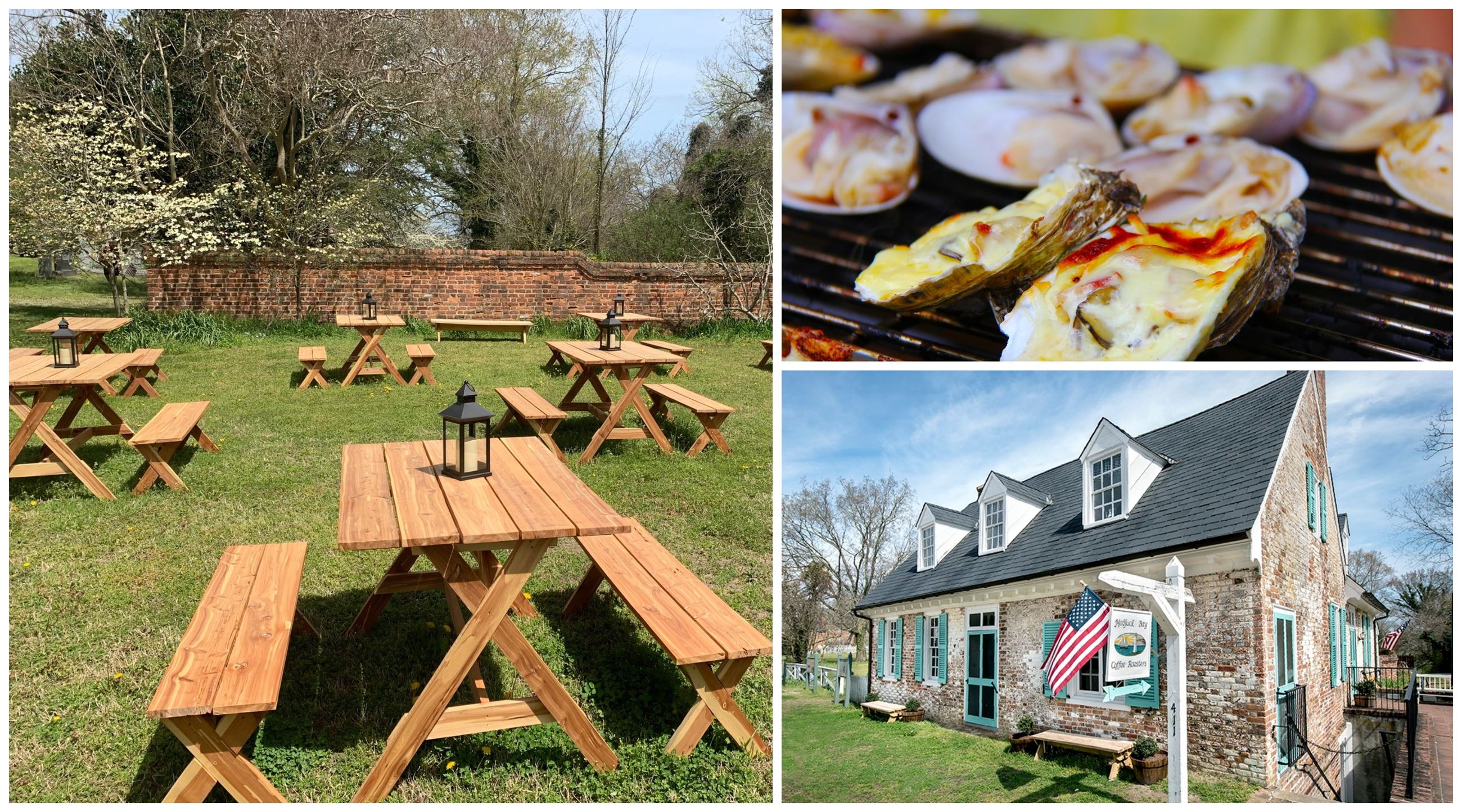 Go Yorktown, it’s your Earth Day! Help us kick off our 2020 Yorktown Market Days season at Riverwalk Landing with a very special Go Green Market to promote environmental sustainability. Be sure to bring your reusable bags for shopping. There will also be a limited supply of free giveaways on site that day in addition to special exhibitors and educational children’s crafts; activities; and games. That’s on top of the more than 40 local artists, vendors, and food trucks who line the waterfront every Saturday. Stay tuned for more details about the entertainment lineup and a special live chef cooking demonstration.

Our award-winning Farmers Market runs weekly April through October so if you can’t make the 11th, we hope to see you another Saturday. In fact, you can click on our 2020 calendar to see all the amazing concerts, markets, festivals, and parades happening year-round. Check back often as we’re always adding new events!

# 3 - Cool History Lessons without the Tests!

Discover the place where the United States gained its independence as you explore the site of the last major battle of the Revolutionary War.  Here at Yorktown, in the fall of 1781, Gen. George Washington, with allied American and French forces, besieged Gen. Charles Cornwallis’ British Army, effectively ending the war.

The American Revolution Museum at Yorktown is a way to get in a little learning, and have loads of fun at the same time! Be sure to check out the short (just 10 minutes), immersive film entitled the "The Siege of Yorktown", shown in the experiential theater. There are always hands-on activities taking place in the outdoor living history exhibit. You definitely don’t want to miss periodic musket firings in the Continental Army encampment, and an opportunity to enlist in the army. At the farm, see 18th-century recipes cooked over an open hearth. If you’re lucky, you might be selected to help volunteer in the kitchen! Ticket info here.

Remember, if you live in York County, James City County, or Williamsburg—admission to the museum is free with proof of residency. Huzzah!

Explore the fields, earthworks, and historic buildings where American independence was won. Driving tours of the battlefield include siege lines and encampment areas. Ranger-led tours of the battlefield and historic town leave from the visitor center daily, and Junior Ranger Programs are available for younger visitors. These experiences are administered by the National Park Service as part of Colonial National Historical Park. There is an admission fee to enter the Yorktown Battlefield. 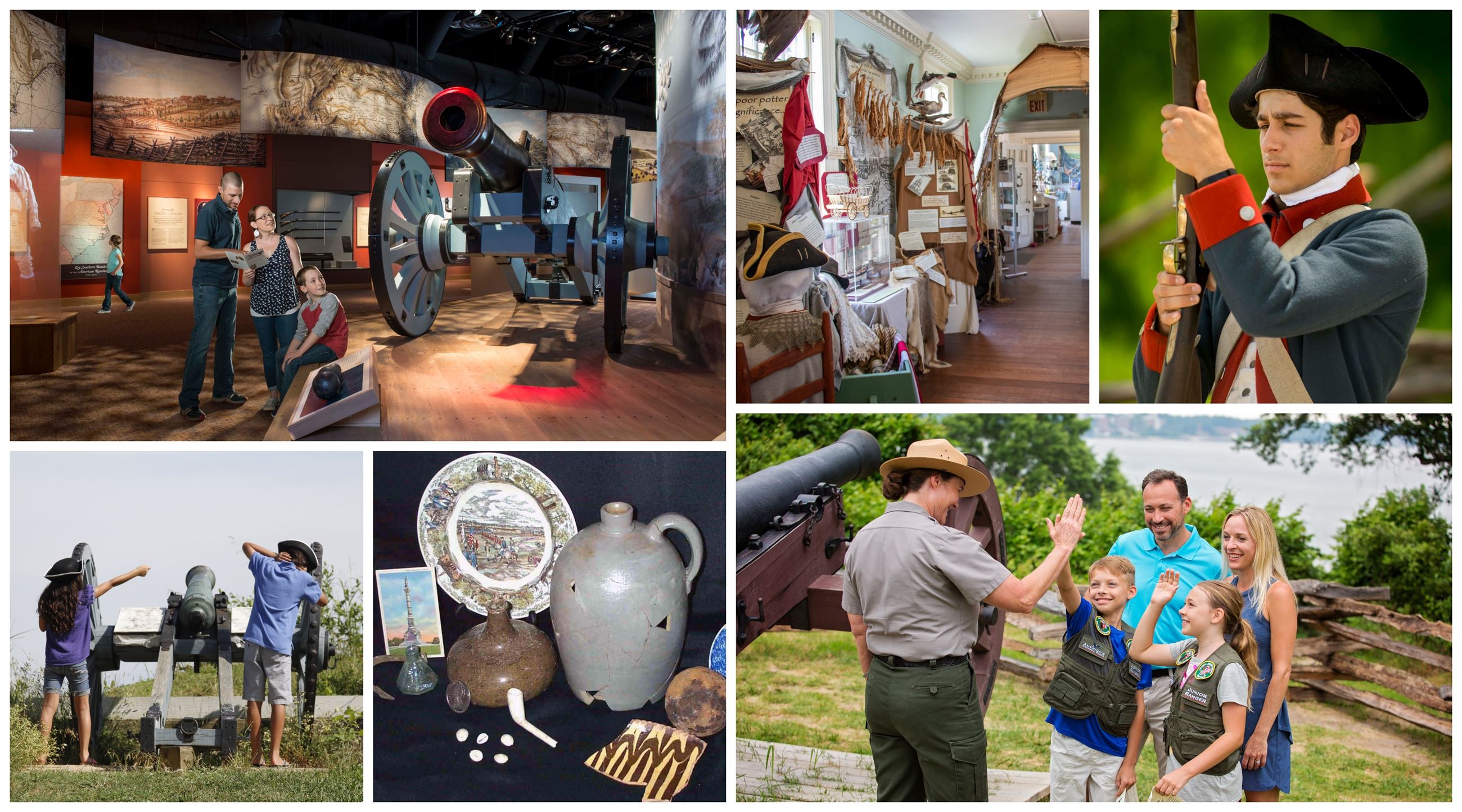 The Watermen’s Museum reopens Tuesday, March 31 with an exciting new exhibit called Bay to Belly. It’s a collaborative project with Thomas Nelson Community College and looks at the Foodways of the Chesapeake, featuring everything from harvesting and packing seafood to local recipes and family traditions passed down over the years. The exhibit will be set up in the Carriage House until April 10 before traveling to the college and then to other museums around the Chesapeake Bay for up to 18 months, finally returning to Yorktown.

You can also stop by the York County Historical Museum (located inside York Hall at 301 Main Street) to explore artifacts representing Yorktown from the time of the earliest Native Americans all the way through World War II. Make sure you stop by the Gallery at York Hall on the main level to purchase a unique souvenir handcrafted by a local artist, to remind you of your vacation!

Historic Yorktown includes several one-of-a-kind eateries with vast menus ranging from fresh seafood and artisan pizzas to locally brewed coffee and hard lemonade to gourmet cakes and desserts. Heck, you’ll even find sushi and saké! Whether you’re searching for a fine dining experience or a casual pub atmosphere, there’s something for even the pickiest of palates.

Water Street Grille has casual indoor and outdoor seating and a menu filled with seafood, tapas, and several kid-friendly options including pizza, grilled cheese, hot dogs, and chicken tenders. WSG also keeps more than 20 micro-brews on a rotated tap so expect something different every time you stop in. Can’t decide what to order? Consider a flight and sample different brews. Once you find your favorite, grab a growler to take home or back to your hotel room or timeshare. During Spring Break, you can also expect live music on Friday and Saturday nights! 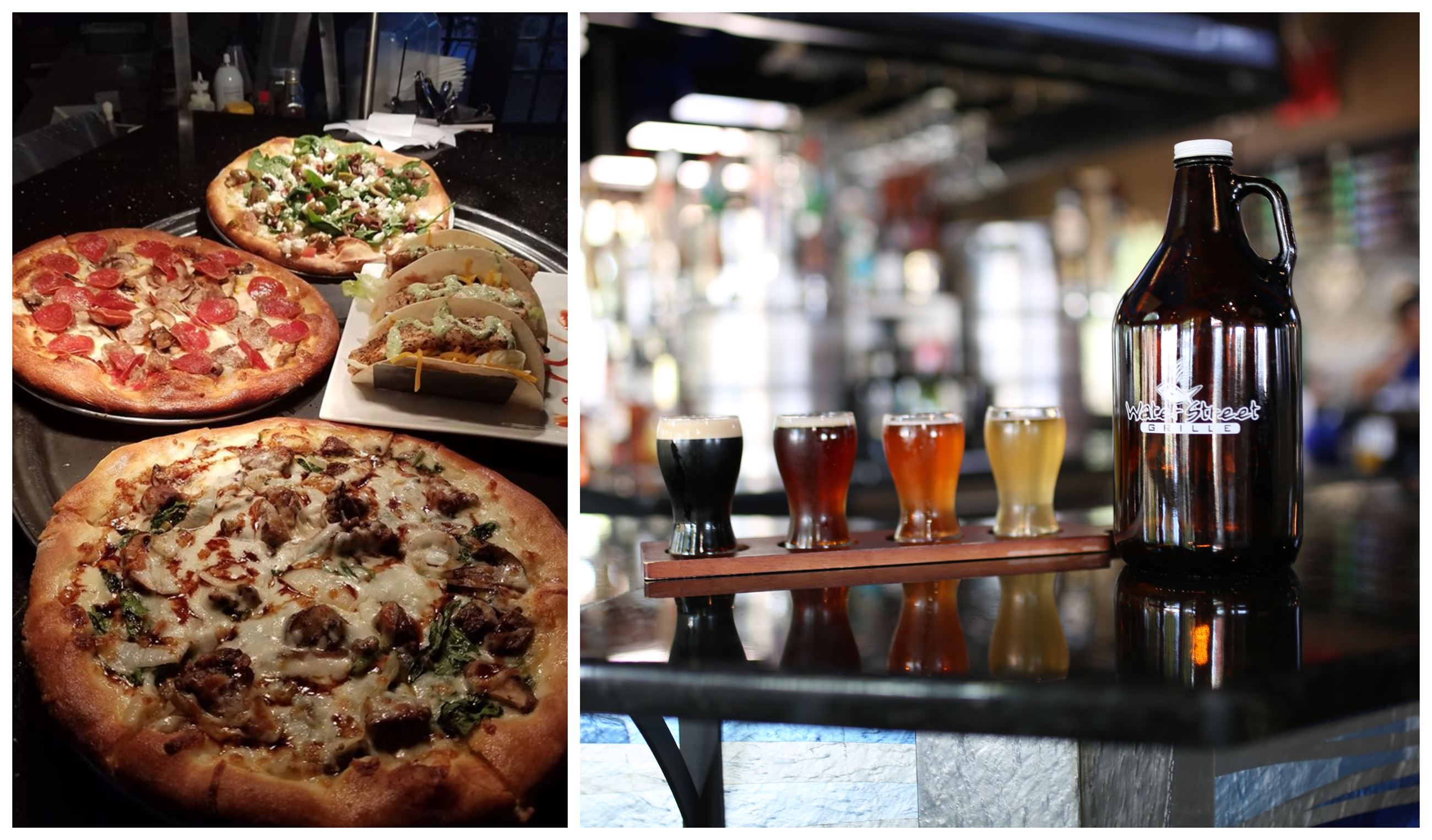 Next door, at Riverwalk Restaurant, enjoy a more elegant seating with a menu ranging from chopped salads to exquisite steaks and fish. If you have an adventurous eater in the family, he or she might like to try one of the Chef’s daily specials. You can also enjoy Sunday brunch, served from 10 a.m. to 2 p.m.

A trip to Riverwalk Landing with the kids isn’t complete without a sweet treat. Ben & Jerry’s has a few options for kids with peanut allergies and those who are lactose intolerant. Ask to try their non-dairy flavors and those made with sunflower seed butter. Oh, and parents, we have NEW FLAVOR ALERTS! Netflix and Chill’d was recently released and is Peanut Butter Ice Cream with Sweet & Salty Pretzel and swirls of Fudge Brownie. Sounds as binge-worthy as the streaming service! The Coldbrew Coffee Fudge Chip also gets our vote. The dairy-free java flavored blend is mixed with fudge flakes, fudge swirl, and that sunflower seed butter we mentioned. Their Cannoli, a spin on the classic Sicilian dessert, is Mascarpone Ice Cream filled with Fudge-Covered Pastry Shell Pieces. And the Peanut Butter Half Baked is chocolate and peanut butter ice creams mixed with gobs of peanut butter cookie dough and fudge brownies. 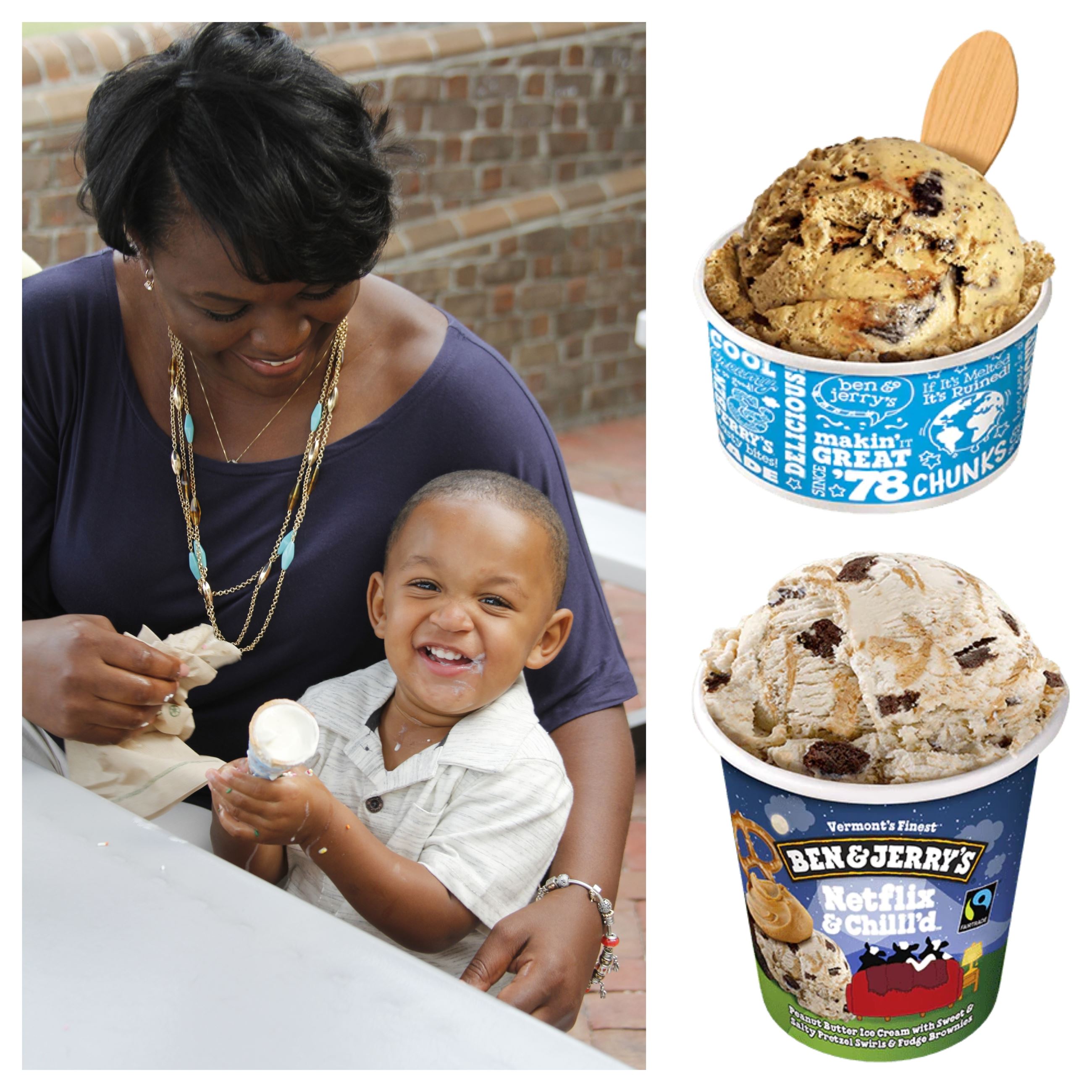 # 5 - Community Chauffeur Aboard the Yorktown Trolley

The FREE Yorktown Trolley is one of the best ways to see Historic Yorktown and this year marks its 20th anniversary! Friendly guides offer helpful information about each stop so you can focus on the scenery, the history, and where you want to have your next meal. The designated route takes you from the Yorktown Battlefield Visitor Center all the way to the American Revolution Museum at Yorktown, making several convenient stops along the way. Each trolley is ADA accessible and Trolleys #3 & #4 feature both an infotainment and interactive tracking system. Just download the SPOT ETA app and get an estimated time of the trolley’s arrival at various attractions. Trolley #4 also boasts individual adjustable air vents and a stabilized chassis system making for a smooth and comfortable ride around town! 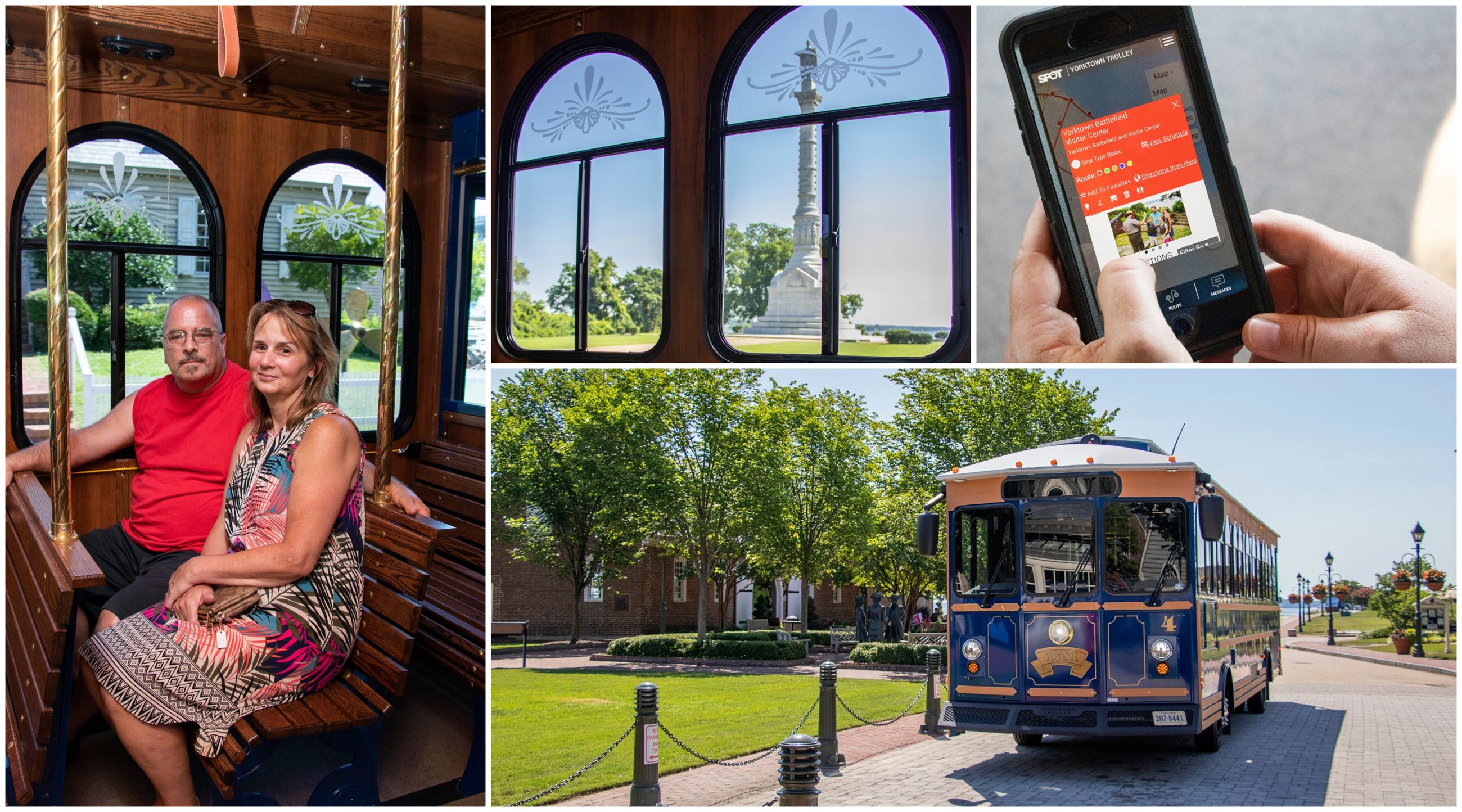 This is just a small glimpse of all there is to do in Yorktown. Be sure to follow Visit Yorktown on Facebook for special event announcements, new product alerts, fresh menu items, and more. And York County residents - don’t forget to use your Citizen Rewards Card for discounts at several Historic Yorktown businesses!