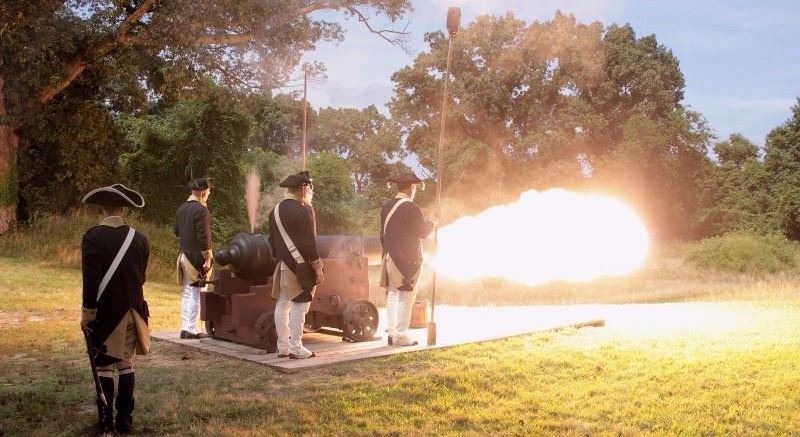 Yorktown’s history considerably precedes 1781.  The present location of the charming town was first occupied by the Native-American population for at least 10,000 years prior to European arrival.  The town is located at the most narrow crossing point of the York River, and natives likely used this point to travel from "the Peninsula" to the "Middle Peninsula".

For centuries, the County of York has figured prominently in both the political and economic history of the Peninsula, the Commonwealth, and the Nation. The port of Yorktown, which remains the seat of government, was the site of the final battle of the American Revolution where on October 19, 1781, Lord Cornwallis surrendered his British Army to the combined American-French forces under Washington and Rochambeau. Yorktown also figured prominently in the Civil War, serving as a major port to supply both northern and southern towns, depending on who held Yorktown at the time.

Today, Yorktown is part of an important national resource known as the "Historic Triangle" (Yorktown, Jamestown, and Williamsburg). The County of York successfully blends contemporary living with the appreciation and preservation of a rich community heritage.

In 1620, Captain Nicholas Martiau, was sent by King James I to build forts in Virginia, specifically at York, and to complete the great log palisade between College and Queen Creeks.


York's fort was initially built just a short distance down river from the present Yorktown, and a small settlement developed there because of the fort's guarantee of safety. This village also became a receiving port and mercantile center for the growing population. The site is now part of the United States Coast Guard Reserve Training Center .


Martiau's early settlement and bringing of other settlers had qualified him to receive several grants of land, one of which is the present location of Yorktown. Sadly, Martiau did not live to see the town develop on his personal landholdings. He died in 1657, but his grandson sold 50 acres of the land for the establishment of "York Town" in 1691. The town's creation established Yorktown as the principal location for securing tobacco, good, wares and other merchandise. The port, wharves, warehouses and other appropriate buildings for the conduct of commerce were situated at the riverfront.

The town continued to grow, and by the passage of the Tobacco Inspection act of 1734, nearly all of Yorktown's 85 town lots had been purchased and development begun. With high quality Virginia tobacco established as the main money crop and Yorktown named as a tobacco inspection port, the town's growth potential for the future seemed secure.

Virginia's planters who lived in Yorktown or had second homes here, lavished themselves and their homes with expensive items from England. In 1764, an English visitor commented that he perceived "a great air of opulence amongst the inhabitants... every considerable man keeps an equipage... very pretty garden spots... avenues... are prodigiously agreeable. The roads are infinitely superior to most in England... and the planters live in a manner equal to men of the best fortune."

Unfortunately, tobacco exhausted the soil and modern fertilization practices had not yet evolved. As a result, the quality and quantity of tobacco declined dramatically from mid-century on, and Yorktown's heavy dependence on the tobacco-based commerce proved to be its downfall.

Yorktown's place in early American history was established by several Yorktown residents who devoted themselves to Virginia's and the new Nation's service. Principal among them was certainly Thomas Nelson, Jr., signer of the Declaration of Independence. Additionally, David Jameson, a Scots merchant of Yorktown, served in the Virginia Senate and in the Privy Council and as Lieutenant Governor and, finally, acting governor in 1781. Cyrus Griffin, last president of the Continental Congress under the Articles of Confederation, was another prominent Yorktown citizen.

Clearly, the ultimate historically significant event for Yorktown is the victory of General George Washington's Army over the British Army. Lord Cornwallis surrendered, on ground known today as Surrender Field, October 19, 1781, effectively ended the American Revolution. The battles which began in 1776 covered much of the eastern seaboard. This final major battle was the culmination of numerous back-and-forth movements between the Franco-American f and British forces. What caused Cornwallis to dig in for a siege in Yorktown? How was Washington able to move his massive troops so quickly to Yorktown? How did the French fleet know to move to its critical location at just the right moment?

A visit to Yorktown's many historic sites will answer some of those questions and inspire even more questions along the way. It's the culmination of the stories of Washington, Cornwallis, Lafayette, De Grasse, and the thousands of soldiers and sailors of the American, British, and French nations that make up the collective story of Yorktown.

The streets of Yorktown today bear little witness to the town's importance in 1781 and bear little resemblance to its appearance at that time. In early 1781, Yorktown was still a bustling port and mercantile center - but it's heyday had clearly passed as other larger more convenient ports became more prominent. The town, however, still had homes, stores, warehouses, storage buildings, public buildings, and other structures packed tightly along its unpaved main street and side streets. Along the river, numerous wharves and associated buildings stood as testament to Yorktown's importance, waning though it was. Buildings of every nature stood chock-a-block along the town's short main street with no thought of our present-day zoning concerns, and, in fact, were monuments to the town's professional, mercantile, and residential prosperity and prominence.

After October 19, 1781, Yorktown was in a considerably different position after suffering dramatically during the siege, with numerous buildings either destroyed or heavily damaged. Many of its occupants left the town, never to return, and several remaining damaged buildings were demolished with little thought of rebuilding. But thankfully, there were those who did stay and repair their homes and businesses. As a result, the story of Yorktown continued.
In 1814, a second disaster struck Yorktown when a major fire destroyed nearly all the buildings along the waterfront as well as many properties "on the hill" in the town--including the church and the courthouse. During this time, the waterfront area was occupied, not by prominent businesses, but by the poorest of the residents of the community. As time and pride had passed Yorktown by, little was done to rebuild most of the destroyed buildings. The county Courthouse was completed a few years later, and the church, renamed Grace Episcopal Church, took nearly 30 years to repair its original marl walls.

Finally, the War Between the States brought Yorktown's second siege in 1862. Again its harbor was filled with gunboats, its streets with soldiers, and its reinforced 80 year-old earthworks teemed with armaments of various sizes and strengths. Following this siege, Yorktown's future hopes disintegrated, and the final blow of 1863 occurred when both the courthouse and the Swan Tavern across the street were blown to pieces by an enormous explosion of stores of gunpowder. The community was so devastated by the war that the courthouse was not rebuilt until 1875.

The celebration of 1881 of the Centennial of the surrender brought national notice to the hamlet, but little but a magnificent monument remained after the celebrants left.

Yorktown remained a backwater town with occasional weak efforts to revise its stature attempted until 1931. The Sesquicentennial prompted purchase of much of the property around town which resulted in the creation of Colonial National Historical Park.

Strolling Yorktown's quiet tree-shaded streets today is a delight for all ages, but considerable imagination is required to recreate the appearance of the town at any particular period in its history. The many early buildings remaining in the town help to recall the 18th-century period of prominence and the additional 19th- and 20th-century buildings and changes expand the visitor's awareness of the continued existence of Yorktown in modern America.

A starting place for any tour of the town should probably be at Grace Episcopal Church, the oldest building remaining in the town. Much altered through the years, Grace Church's marl walls have stood overlooking the York River since 1697. Six generations of the Nelson family are buried in its churchyard with the burial place of General Thomas Nelson, Jr., commanding the grounds.

The Virginia Sesquicentennial of the American Civil War Commission was created during the 2006 Session of the General Assembly for the purpose of planning for and commemorating the 150th anniversary of Virginia's participation in the American Civil War, the duration of which will be 2011 through 2015.

Each locality was asked to form a local committee to begin planning for the four-year, statewide commemoration period. In early 2009, the York County Sesquicentennial of the American Civil War Committee was formed and, on June 2, 2009, the York County Board of Supervisors adopted a resolution supporting the State Commission and its work to commemorate the 150th Anniversary of the American Civil War in Virginia. The resolution also stipulated that York County would join with the neighboring jurisdictions to support the organizational principles and statement of purpose for the Historic Triangle Civil War Committee as set forth to guide the commemoration in America's Historic Triangle.

Our key partners in the commemoration are: